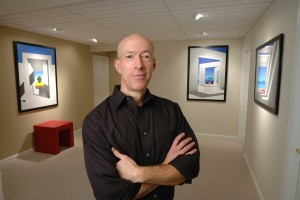 S teve Perrault holds graduate degrees in theology, clinical psychology, and art education. He attended Parson’s School of Design. A full-time painter for the last 16 years, he has a work history as a psychotherapist, jail and prison chaplain, and art instructor at the primary, secondary and college levels.

Steve Perrault, a Minnesota native, has been featured in over 50 national and international publications, including The New York Times Magazine, ARTnews (twice), American Art Collector, and Southwest Art. He has been a finalist in The Artist’s Magazine’s annual “Best Art” competition an unprecedented nine straight years, was the subject of a feature on NBC Dateline television program, and is in collections around the world, including Academy Award-winning film director William Friedkin, Paramount Pictures Chairman Emeritus Sherry Lansing, The Smithsonian, Washington, DC, and the Environmental Protection Agency National Headquarters.

Steve is represented by numerous galleries in the United States and Europe.

He is married and lives in Harrisburg, Pennsylvania with their Basenji, Bart.

My education and work experience as a psychotherapist, jail chaplain, and art instructor, strongly inform my paintings by incorporating my particular involvements and symbolic thinking into a unique iconography.

Architectural elements derive their meaning through form and context. The simpler its expression, the deeper is the impression it makes. Simple and formal structural components can provide a visual language that encourages a sense of order and harmony. Yet beneath it lies a deeper conversation about the perception of structure as metaphor. I create passages of inside-outside space, lightness and darkness, containment and expansion, screening and distinction. These characteristics and dualities are mediums for personal meditation.

I believe art-making demands an inner life. Observing art is an invitation to an inner life. Genuine art leads one to face oneself. As Henry David Thoreau said, “We are constantly invited to be who we are.”

Steve Perrault’s acrylic landscape paintings are a distinct aesthetic in contemporary metaphoric realism, and speaks the language of our times. Architectural metaphors of light and darkness, containment and expansion, inside and outside, promote a sense of place and hope, while asking questions concerning passages, boundaries and vision. These acrylic paintings express harmonious environments of modesty, honesty, order and calm, allow spontaneous insights and moments of introspection.

READ MORE ABOUT THE ARTIST.

As an avid collector of Steve Perrault’s work, I’m continually amazed by the different moods and depths his paintings suggest. I have four of Mr. Perrault’s larger works and I spend a part of each day quietly contemplating them and finding new meanings.”